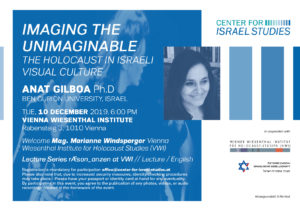 Inspiring lecture by Dr. Anat Gilboa (Director of the German Project at Ben Gurion University/ Israel) at the Vienna Wiesenthal Institute, followed by an intellectual discussion elaborating on “Imaging the Unimaginable. The Holocaust in Israeli Visual Culture” Tuesday at the Vienna Wiesenthal Institute for Holocaust Studies.
What is the linkage between an iconic photo “The Boy” from the uprising at the Warsaw Ghetto, that has been “prettified” by a rather unknown Israeli artist, between the outstanding dance performance of Ohad Naharin ”Echad mi Yodea”, photos that break taboos and a number of monuments and memorial sites in Israel?
According to Anat Gilboa these are different expressions of Israeli cultural heritage relating to the Holocaust and commemorating the “Unimaginable” as it is perceived in Israel. The crucial question remains: how do we distinguish between visual culture versus visual art?
Dr. Gilboa uses categories to bring clarification: is it memorialisation, commemoration, re-enactment?
It was fascinating to observe a discussion that expanded into spheres such as gender issues (relating to Nir Hod’s painting “Mother”), to the question what is taboo (relating to the photo of three sisters, Holocaust survivors depicting their pain through showing the tattooed numbers of the concentration camp), to the question of my/your/our Holocaust as perceived by Holocaust survivors as well as by the Mizrachi (the Sephardic) community and by the Arab population in Israel. It’s all about the context one could argue and continue an ongoing debate of utmost importance regarding the loss of oral history, the loss of eyewitnesses and the loss of direct interaction.
With this function, the Center for Israel Studies sets off for a number of lectures dealing with the disappearance of vital voices remembering the „Unimaginable“ . Many thanks to Mag. Marianne Windsperger and the whole team of the Vienna Wiesenthal Institute for Holocaust Studies as well as the ÖIG for this wonderful cooperation.