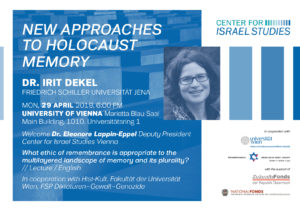 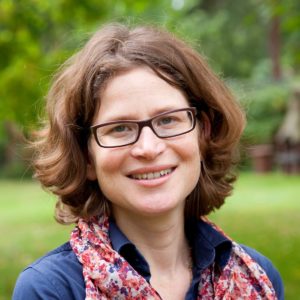 What ethic of remembrance is appropriate to the multilayered landscape of memory and its plurality?

How are Holocaust memories performed in contemporary Israel? How do they shape, and how are they shaped by, the institutions that are tasked with studying, preserving and presenting them? How are these reciprocal relations, reflect changing attitudes toward politics?   Finally, how do new studies of antisemitism, racism, and ethnic cleansing in the 20th century affect those memories and popular sentiments toward their possible change in the era after the survivors?  Dr. Dekel will discuss these questions and the centrality of Holocaust memory for understanding the access that majority and minority groups have to cultural capital as well as to citizenship.   She will focus on Israel and compare major cultural changes and currents to those in Germany and the United States.

Dr. Irit Dekel:  She received her PhD in Sociology from the New School for Social Research in 2008, MA in Sociology from the New School for Social Research; BA and MA in Sociology and Anthropology from Tel Aviv University. Dekel studies memory politics and diversity around Holocaust memory in Germany, the idea and experience of home and exile in Israel and Germany and debates in regard to religious, ethnic and cultural pluralism in Europe. Irit Dekel was  Visiting Professor for Israel Studies at University of Virginia  in 2016-17.  She teaches on Israeli politics and culture, Collective Memory, marginality and perceptions of home, migration and return in Israel.
Currently she is Senior Research Associate at the University of Jena, Germany.

Welcome: Dr. Eleonore Lappin-Eppel, Deputy President of the Board of the Center for Israel Studies

This evening lecture was organised
in cooperation with: :
Faculty of Historical and Cultural Studies at the University of Vienna (FSP: Diktaturen-Gewalt-Genozide)
The Austrian – Israeli Society